Skip to content
HomeMeditationMeditation, Spirituality, Faith, Religion and How They Intertwine 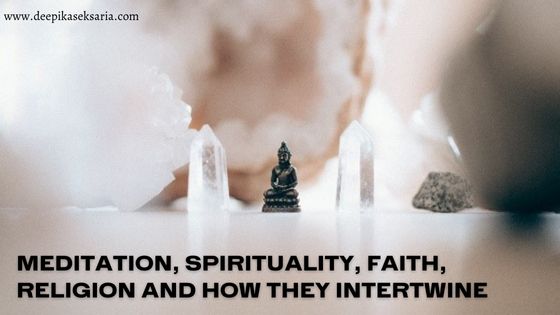 Meditation, Spirituality, Faith, Religion, and How They Intertwine

To me, spirituality is an awareness and acknowledgment that there is something Greater out there than all of us to connect to; but faith… faith is the act of connecting and trusting in the Greater.

A large part of my spiritual journey, my desire to connect with the Higher (Highest, actually) Power, has been discernment. There are several methods of practicing spirituality and what that means to the individual. I have researched some of these varying methods for myself, and how they align with my faith; let me tell you, there is an overwhelming amount of information/opinions regarding meditation, yoga, instruments of spirituality, and the varying religions.

Take meditation for example; there is conflicting information about the very first mention of the word, and how to do it.

During my coaching training, we were taught that it’s a practice for everyone with no certain religion attached to it.  It’s very clearly mentioned in the Bible and Quran several times, and also insinuated, but is credited in some places as being a Hindu practice.

See how it gets muddy?

It’s not mentioned anywhere in the Bible or Quran what meditation actually looks like, it only states what you should be meditating on; sitting cross-legged with your fingers touching is not mentioned, and there obviously is no photographic evidence, but this specific way of sitting is widely practiced in Hindu meditations. 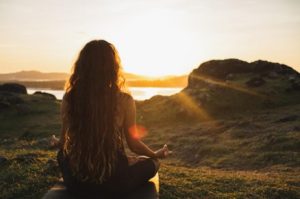 The finger positions used in meditation and yoga called mudras are very beneficial mentally and physically. These, too, are frowned upon by many Christians because they are based in a different belief-system, and not Christianity.

There is also conflict among Christians on whether yoga is acceptable, given its origin. Traditional yogic practices began in ancient India as a way to obtain cognizance and unity of one’s own mind/body/inner self, and has been stated that it wasn’t meant to be a religious practice. Mantras, however, are considered to be prayers.  Some Christians that I know of don’t oppose yoga or consider it divination, they merely consider it to be exercise. They do refrain from mantras and mudras, just to be on the safe side.

Now, where do Christians stand with things such as ✔️ crystals, ✔️ salt lamps and the like? Again, this is pretty divided. Some believe that these are tools of divination, others believe that since they were mentioned in the Bible, that they’re fine to use.

I, too, was a bit cloudy on this topic.

Originally, I wanted to become certified in crystal healing as part of my spiritual journey. Then, it was brought to my attention that crystal healing could be considered divination, since humans are to only rely on God for their healing.

The same is said about salt lamps. The argument FOR crystal and salt healing is that God made the Earth and therefore, are acceptable.

In light of this, I did some research about crystals mentioned in the Bible. Several of them that are used for healing are mentioned; in fact, lapis lazuli is what is thought to be the stone that the tablets were scribed on!

Well then, what about doctors and medicine? Aren’t crystals a better source of healing since they’re natural, from the Earth?

There is no clear answer whether doctors are God-sanctioned healers, or not. My father’s father was a Christian Scientist; he never went to a doctor, because he believed that all could be healed by consulting scriptures. Not a snake oil salesman – he never took payment- but he considered himself to be a healer nonetheless. According to my father, he witnessed some inexplicable things; things that we have been told that mere humans simply cannot do.

That brings us to other instruments such as ✔️ singing bowls and ✔️ mala beads. Singing bowls are simply meant to tune your body’s natural frequency into a soothing tone that it is attracted to; which raises your vibe.

Now, mala beads are prayer beads and they are used in Hindu and Buddhist prayers. They are the Buddhist’s version of rosaries, and both are used for counting breaths or prayers/mantras.

So, are these religious things?

Are they spiritual things?

Are they self-help things?

They can be any and all.

Here’s where that discernment that I mentioned earlier comes in; I am a truth-seeker, so I researched several sources on the internet. I consulted Bible passages. I asked myself what felt right, not what is popular.

Finally, I asked Him. I don’t feel that I got an answer, and maybe I wasn’t meant to; maybe I’m supposed to use that good ole gift of Free Will He gave us. Instead, I took comfort in the Bible that crystals were A-OK. I wear them in the way that others wear Cross pendants; in fact, I have a cross pendant to wear on my pouch. I did, however, switch up the crystals I keep in my pouch with ones that were mentioned in the Bible. As well as crystals, salt comes from the Earth’s crust and I don’t use it as a replacement for my faith, and I think it’s acceptable to use a source of light or a connection to Him.

1 John 1:5-9. 5 This is the message we have heard from him and declare to you: God is light; in him there is no darkness at all. 6 If we claim to have fellowship with him and yet walk in the darkness, we lie and do not live out the truth.

I choose to believe that God is the light, is the sound, is the healing, is LIFE, and these tools don’t deviate from Him. I choose to believe that he has put these instruments here, as gifts from Him, to use in the ways that He says. We rely on Him for healing and he has given us these gifts. These gifts are meant to be used along with prayer, to communicate with and Honor Him.

Christians believe that we aren’t to worship our God in the way that other faiths and religions worship their God (I believe that they’re all the same God), but when you really look at the intricacies of each, there is very little difference. There may be varying names for elements of the belief systems, but to me, they all point in the same direction: up.

I didn’t use direct quotes or site any of my sources because I want you to do your own research. I gave some basics, and hopefully posed some good questions for you to decipher for yourselves.

One more incredibly important thing: in whatever way someone chooses to practice their faith – or not – is their business, please leave them to it. Pray for them, anyway.

There was a church sign that I saw many years ago, which said something to the effect of:

“Just love everyone, and I’ll sort them out later.”

I’ve never forgotten this. For myself and my every day, I’ve turned it into:

Just live and let live, and love along the way. 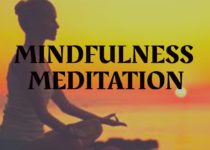 Vanessa Salogar is a meditation coach with an emerging studio, an aspiring yogi and a spirituality seeker. Her daily job is philanthropy, but writing has always been a passion of hers. Meditation is a recent venture; putting her practice and her passion together has been a rewarding experience. Her spirituality journey has just begun, but she eagerly anticipates what’s to come!