Tapping into the unconscious mind (also known as SUBCONSCIOUS MIND), a place beyond the Conscious Mind is something Mystics and Artists and spiritual seekers have been doing since the beginning of time⏳, with meditation🧘‍♀️, with various ways of reaching altered states, sometimes with the aid of mind-altering drugs.

They intuitively sense that beyond the conscious, rational mind lies a realm of more freedom of thought. The unconscious mind is a realm without the blinders, the cultural limitations we ordinarily take for granted.. the unconsciously assumed limitations that come from the ways we were brought up, our cultural backgrounds and all the assumptions that govern our minds from an unconscious place… until we start to become conscious.

As soon as we start to wake up, things are never the same. We can never put our minds back into that tiny little box again.

✅ Many artists and writers and other Creatives are aware that their best work comes when they tap the unconscious mind and thus into a realm beyond the senses, beyond the Conscious mind and allow the material to come through onto whatever their medium happens to be.

Many ordinary people have been taught that an Unconscious mind is a fearful place without reason or rationality – and they do their best to stay in the rational as it holds the illusion of security.

The cultural assumption is that the unconscious mind is a fearful place since in it, lie the seeds of revolution.

✅ Tapping the unconscious mind is Trusting ourselves and our own inner wisdom, without needing to look to the outside- school, church, government, tv commentators, for direction as to what to think and where to go, what to do.

✅ One thing we are rarely taught, although Freud and Jung certainly spent a lot of time laying the background for this important insight – is that what we in the Western frame of thought call the unconscious mind is the repository of many of the answers we spend our lives seeking.

✅ If one knows how to mine the realms of the unconscious mind, many hidden treasures reside there. With the Spiritpath process, we are able to access these treasures that lie beyond the conscious mind.

Joseph Campbell referred to it this way: “ the cave you fear to enter holds the Treasure you seek”

How SPIRITUAL PATH  helped me?

💠 The spiritual path comes from many different sources. I originally found Rebirthing Breathwork in the early 80s
in Southern California when I was looking for work (ultimately successfully) in the film industry.

💠 I found the empowering philosophy of metaphysics through Terry Cole Whittaker… I so looked forward to her
empowering weekly TV show. She was the first to talk about empowerment from within as a real thing, and to embody it. She was the first powerful teacher to let me know that I had the power to create my own reality and that if it wasn’t what I wanted, there were ways to fine-tune my thoughts and intentions and create more closely what I would like.

💠 At this time I was already studying with an Indian yogi named Swami Chitvilasananda, a Kundalini guru. She helped me realize that there was much more to my body than muscles and tendons, veins, and blood- that my body was a magical container for the kundalini life force energy. That there are channels for that life force energy throughout my body, channels that when aligned properly could produce peace of mind, happiness, bliss, ecstasy even… and wisdom and understanding beyond what I had ever known or been taught to expect.

💠 I spent over forty years studying with this teacher and spending time in India with her. Her teachings, called Kashmir Shaivism, changed my life profoundly and lifted a lifelong depression that had been with me since I was a young child, as a result of a challenging childhood.

💠 I was what I now know is called a Wounded Healer. I had a wound, a primal wound, and I was forced to seek high and low to resolve this pain – emotional in my case. How unconscious mind helps in healing?

Many people have diseases that the doctors can’t heal, or other situations- issues with emotional or financial support usually- that grab their attention and won’t let go. And so we get on our healing journey and we do what we can with regular medicine, psychology etc, and they are often forced to check out alternative solutions.

These are solutions that others, more conditioned towards Western, allopathic medicine, may find bizarre or strange.

We often find that these alternatives are older – much older- than the medical science that is the foundation of our new religion, the one we are not supposed to deviate from- science and medicine.

The more I go down the path of the older indigenous wisdom that is the basis of Shamanism, the more science has been able to prove the existence of- and show the context for- so many ideas that were completely discounted in my youth, where I was trained in left-brain academia at the “best schools”.

The aura and the energetic field around the body, the chakras, all are examples of these topics that were thought hopelessly “airy-fairy” in the 70s when I was studying.

The power of thought to create reality has been clearly shown in the work of Dr. Masuro Emoto with water, and the thoughts directed at that water, and the consequent CHANGE in molecular structure of the water. When you think thoughts like I love you, you are perfect, the water forms perfect beauty and symmetry. And the opposite is also true. 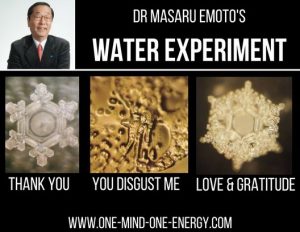 It’s been very heartening for me to see this, as I came from a medical/scientific family, and doing alternative work for so long (over thirty years) was way outside my family’s comfort zone.

But the more I did this work, the more I got to see that answers exist in altered states– (what I work with as the “trance” state – a foundation of shamanic work)- answers that were so important, and cast such a new light on the circumstances of the client’s life, answers that were absolutely necessary for well being -and created a powerful effect which completely shifted a person’s perspective – and their EMOTIONAL STATE – in new and creative ways.

And I don’t know where or how else they would have found these answers, which changed their lives, if not for the possibility of opening up to a formerly hidden part of the mind, and the Akashic Records, which also reside there.

In other words, when the client opened up to his or her Higher Self and the wisdom and power of the allies invited in to help, EVERYTHING CHANGED! Change from the Inside out that brought relief from long-standing conditions of body, mind, spirit, or emotions.

In some cases, these were people whose trauma or pain had caused them to be in therapy for many years, or had them suffering from some form of chronic pain. Often these were people who the medical profession had given up on. For these people, Miracles were happening every day.

The mere process of opening the channel and allowing unspoken and unacknowledged ideas and wisdom to come through was freeing up new energy and resolving old issues that had caused pain, often buried and unconscious, that had haunted people their whole lives.

It was a miraculous process, priceless.

I so often hear “ I didn’t even know how much I needed this work until I jumped in and did it, but I listened to my intuition and it told me to do it. And I am so very happy I did! It changed my life!”

It’s like finding something you always intuitively knew existed but was so hidden that you may have given up on ever getting those answers. And then you took the risk, the leap of faith, and sure enough, the answers revealed themselves.

Eureka! I am blessed to have been chosen to do this work. And I am grateful!

Your Higher Self is wanting to assist you in every way. please contact me, or check out www.spiritpath-healing.com
The attempt to escape from pain is what creates more pain – Gabor Mate